A Synechron Inc. team placed in the top three finalists out of 131 entries in its first ever hackathon: the global blockchain hackathon at the World Government Summit Blockchain Virtual GovHack in Dubai, UAE. The results were announced February 14, 2017. The Synechron team of five employees set out to solve the problem: How can existing title deeds for land registry be handled in Dubai using blockchain technology?

Synechron is a New York–based financial services consulting firm whose clients include global investment banks, intermediaries, hedge funds and wealth managers. For the first time, it is working with a number of companies on blockchain use case and application development initiatives.

The World Government Summit is a UAE-based international organization that serves as a platform for global dialogue to “revolutionize” how governments operate and how government policies are made.

Sponsored by Microsoft, IBM, ConsenSys and BlockApps, the Blockchain Virtual GovHack is aimed at students and startups from around the world that experiment with new technologies to produce outstanding applications. The winning team took home $100,000, the runner-up $30,000 and the second runner-up $20,000.

The competition is reportedly the world’s largest virtual blockchain hackathon with 1,011 participants across 41 nationalities working on 131 projects. Winners were selected by a panel of judges that included blockchain experts from IBM, Microsoft and ConsenSys, along with Dubai government officials.

The United States submitted 40 projects, India had 29 entries, Canada and Australia had 13 each, and the UAE 9 projects, while Spain and Germany had 7 and 6 entries respectively.

The international panel of judges, including many high-profile names in the blockchain space, awarded points in the following four categories:

Execution: How well put together was the project and the demo that was shown? Does it solve a genuine consumer problem? (5 Points)

Impact: Is the solution commercially viable? Does it have the potential to scale? (5 Points)

Creativity: How out of the box was the solution? (5 Points)

Design: How well designed, including UX, UI and user flow, was the solution? (5 Points)

“Team Land Registry was made up of a group of five Synechron employees from its 50-person blockchain team across geographies and business areas. We had financial services specialists, technologists and digital experts on the team that allowed us to develop an end-to-end solution. The team accomplished this by mapping the existing process and re-imagining how those decentralized parties would need to change their workflows to submit that information by using blockchain [technology].” 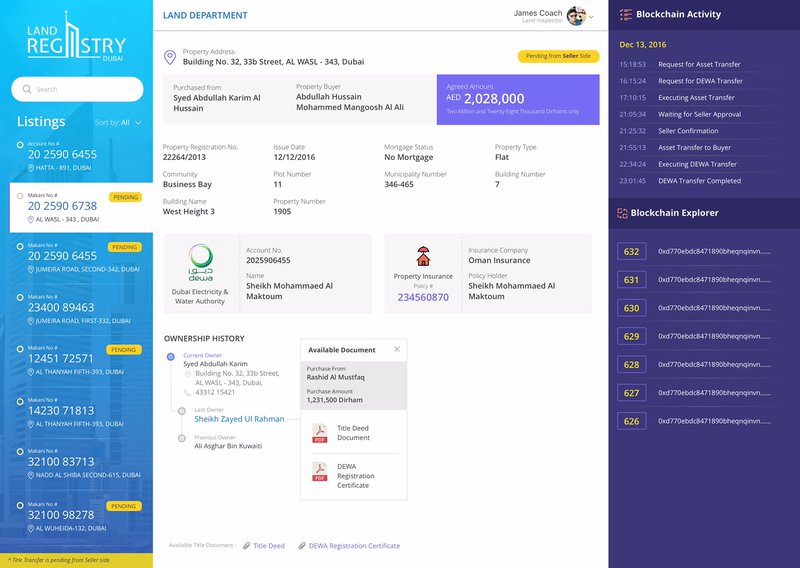 Above is the final document submitted to the judges by the Synechron hackathon team showing all the elements needed to build a land title registry program on the Ethereum platform.

The platform included four nodes, one each for the land department, the property owner and buyer, the banks and mortgage lenders, and the property insurance company. The UI was built with user experience in mind, integrated with the UAE’s Makani API to provide GPS coordinates and a blockchain activity log and viewer.

Horton told Bitcoin Magazine that they chose to use the Ethereum blockchain because the team felt that it was the best for this use case:

“Ethereum is a public blockchain that is permissionless, so currently it has made the most progress with the issue of scalability, whether it is by bringing identity to the entire human population or in data from IoT devices.”

“There are a number of blockchain platforms available today. Currently, we’re seeing three leaders pull ahead from the others – Ethereum, Hyperledger and Ripple. Each has its own strengths, and before selecting a platform, companies need to do a thorough business analysis of the problem they’re looking to solve and which platform best suits the use case.”

According to Horton, what enabled Synechron to create a winning model is its “power of three”: a deep technical understanding of blockchain technology, the consulting expertise to understand and explain how business operations can benefit from distributed ledger technology, and the design expertise to be able to create user interfaces that allow people to easily conceptualize the potential of the technology.

“Within a few days of the award at the World Government Summit, we have already seen serious interest in our land title deeds solution by government entities in Sweden, Cyprus and Qatar,” Horton added.

Project Oaken, a blockchain and IoT design firm put a Tesla on the Ethereum blockchain as a piece of a smart city toll road infrastructure solution to win the hackathon.

In second place was a computer science and electronics technology company Maroon Studios with their entry HealthBlocks.