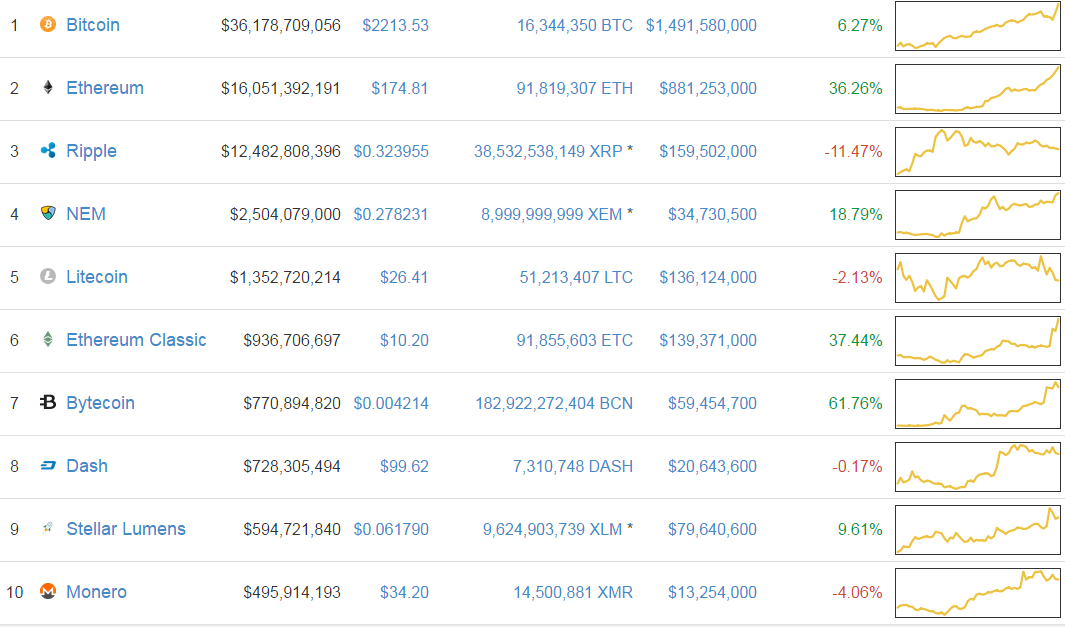 Wonders shall never end in Cryptoland! On Sunday Cointelegraph predicted that it is going to be hot at the top 10 on CoinMarketCap this week. Truly less than 24 hours, on the early mornings on Monday, Ethereum Classic flew so much to make an upward adjustment of 31.46 percent.

In the process, ETC knocked down Dash to take over as the sixth most valuable cryptocurrency in the world. Nothing surprises anyone anymore in this ecosystem when it comes to the growth of altcoin. Just when everyone thought the battle between Dash and Ethereum Classic is over and that Dash has conquered, the latter has called it a bluff.

This brings ETC’s market capitalization to almost $900 mln and a market price of $9.72. The gap between it and the pacesetter of decentralized community governance is over $170 mln and even two steps behind.

A couple of weeks ago Cointelegraph spoke to Carlo Vicari of Ethereum Classic about its current impressive growth and he was really optimist of the future. He revealed how the Ethereum Classic community is bulging with newcomers.

Looks like ETC is gunning for the top to get off his senior brother, Ethereum out of the way, even though it looks unfeasible at the interim. But then again, altcoin growth is like we are in wonderland.

Moreso in a classic move Ethereum has regained the number two position from Ripple deepening the gap between them to more than $3 bln. It was with such great improvement of over 36 percentage point of growth. Its market price is now an admirable $174.81.

As Cointelegraph predicted, the battle between the two is not yet over, and this was informed by how the two are all well-patronised utility. Whether Ripple can make another come back to the number two spot is just another interesting trend to be on the look out for in this space.

Yet still, the most intriguing development is Bytecoin that was firmly rooted on the tenth rank rising all of a sudden to the seventh position overnight. It made a casualty of Dash and Stellar Lumens and is now behind Ethereum Classic.

On Sunday Cointelegraph asked whether Bytecoin has come to the elite echelons to stay or just one of those flash in a pan you see with altcoin. It appears they are proving it is not a fluke at all. The adjustment is unbelievably impressive! A 61.76 percent gain to knock out two strong cryptos tells you they mean business.

Anyway, it doesn’t look well for Monero at this stage. It’s now sitting at number 10 with Dogecoin barking to push it away. For a few months now Cointelegraph has been referring to it as ‘gradually declining’ Monero.