Thanks to our volunteers and the financial sponsorship of The Bitcoin Foundation, we’ve made the following accomplishments this quarter.

“Muchas gracias por atender esto inmediatamente, ¡y por el trabajo realizado!” (Many thanks for doing this immediately, and for all the work done!) –Adamantike on Transifex.com 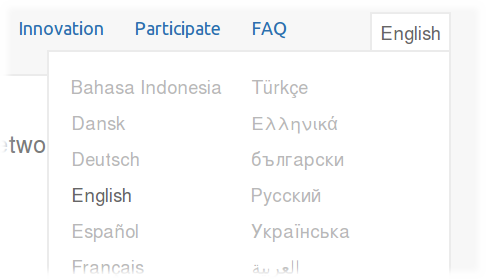 Non-US/UK visitors accounted for 35% percent of Bitcoin.org’s traffic this quarter, about 2.5 million page views. Future translation work will likely depend on how the English portion of the site is changed in the coming months.

We are extremely grateful for all the translations contributed by volunteers and paid translators on our Transifex project page as well as the many reviews made by Saïvann Carignan.

The three main developer documentation webpages received a total of about 90,000 page views this quarter. Accomplishments this quarter include:

Most documentation was written by David A. Harding, with reviews conducted by Saïvann Carignan, Jonas Schnelli, and others. 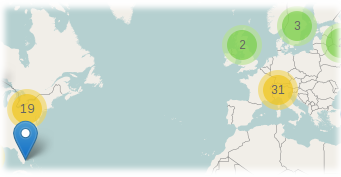 The English homepage and Getting Started page by themselves received over 2.0 million visits this quarter. These and other regular content pages are often updated based on suggestions by first-time contributors, with the bulk of updates going to the Events page and the Resources page (and its many translations).

We are grateful to all of the contributors who opened issues and made pull requests to keep the site content current and useful.

“Thank you! Good catch!” —GreenAddress on GitHub after we discovered a bug in the new GreenBits wallet (source)

The Choose Your Wallet page is one of our most visited pages—just the English version of the page alone has received over 400,000 visitors this quarter. However, maintaining the page is also one of our most time-consuming activities due to the number of wallet authors who want us to include their wallet on the page.

Saïvann Carignan spearheaded all the wallet efforts above, although we are also grateful to the many people who commented on the wallet issues and pull requests.

As Saïvann has become too busy to continue maintenance of the wallet section of the site, we are actively looking for a volunteer to take over reviewing wallets and managing wallet requirements. This is a great volunteer position for anyone who likes trying new wallets and who wants to interact directly with wallet authors.

“Awesome, thanks for writing this down!” —Andreas Schildbach on GitHub (source)

Fulfilling a request made by Wladimir J. van der Laan, Bitcoin Core’s lead developer, we were proud to write and publish a guide to running a full node this quarter. The goal is to encourage users to run full nodes when possible to support the Bitcoin network.

As of February 28th, the full node guide has been published for only five days and has received over 4,000 page views.

The guide was primarily written by David A. Harding, with reviews by Saïvann Carignan and Jameson Lopp, and promotion also by Jameson.

“Confirmed it works. Thanks a lot!” –Wladimir J. van der Laan on GitHub about the updated Download page (source)

Sometimes small tweaks to the site can have a large impact. Some of the changes made this quarter include:

Saïvann Carignan wrote the code to enable the torrent and magnet links as well as sorting releases by version number. J. Louis optimized the SVG images.

“I don’t know what people are complaining about… I think it’s pretty great actually!” —/u/itsgremlin on Reddit about Bitcoin.org in general (source)

With 7 million page views per quarter, Bitcoin.org serves an average of 54 pages a minute—so even a single second of downtime might prevent us from helping a Bitcoin user. This quarter we took additional steps to ensure that the site works correctly while also attempting to make it easier for new volunteers to contribute to keeping the site accurate and updated.

Travis CI support was added by David A. Harding with advice and support from Cory Fields, Wladimir J. van der Laan, and Pieter Wuille. Troubleshooting was performed by Saïvann Carignan with the help of GitHub user @patrikr, Christopher Gurnee, and David. Preventative maintenance and audit code were contributions by Saïvann, and the volunteer quick start guide was contributed by David.

“This is awesome and sorely needed. […] Appreciate everything you do for the community, keep up the great work!” —/u/wserd on Reddit about the new Full Node page (source)

In addition to Bitcoin.org’s recurring goals, such as funding the servers (currently about $600 USD per month), we hope to accomplish the following three major goals during the next quarter:

“Thank you for your sponsorship and your support of our work!” —Saïvann Carignan

“The Foundation provides us a modest monthly grant so we can pay for servers and some other stuff, and we put their logo on the bottom of the page and write a quarterly report telling them what we’ve accomplished thanks to their sponsorship. Beyond that, they let us make our own decisions, for which independence we’re quite grateful.” —David A. Harding on Reddit (source)

We thank The Bitcoin Foundation for their continued financial support of the site, and extend our heartfelt appreciation to the 15 people who contributed commits this quarter and the much larger number of people who provided valuable feedback in over 439 comments on pull requests and issues.

If you have any questions about the content of this report, please open an issue on GitHub or email Dave Harding, [email protected].