Cointelegraph got a chance to sit down and talk with Mark Edge, the man who introduced Roger Ver to Bitcoin and the host of Free Talk Live radio. It was hard to miss Mark at the North American Bitcoin Conference, he was dressed in full garb and looked as if he could be a stunt-double in Monty Python and the Holy Grail. But unlike Monty Python, Mark is no joke.

Mark’s Free Talk Live is one of the first media outlets to cover Bitcoin, and was one of the earliest members in the crypto community. Most publications did not pick up Bitcoin until around 2013 with the exception of Wired, who ran a Bitcoin story in 2011.

Gavin sent Mark an email around February 8, 2011 saying that he wanted to have lunch with Mark to discuss “a new currency”. Mark met Gavin at the Thai Garden in Keene, New Hampshire, United States. Andresen began by giving Mark the details about the new currency and for the very first time in his life, Mark heard the word Bitcoin.

Although the world of digital assets continues to confuse people today, back in 2011 digital assets were a completely alien concept. When Gavin and Mark had lunch, Bitcoin was only two years old and had not even broken the US $1 threshold. Mark asked Gavin questions like “what is it backed by” and “what if the government tries to take it down?” but by the end of the conversation Gavin was able to convince Mark that Bitcoin had some viability.

At the end of the meal, Andresen wanted to pay Mark in Bitcoin for the food they just ate. Andresen sent Mark 25 BTC for his meal – Bitcoin was 40 cents a piece at the time and the total came to about 10 dollars.

“Hey Mark: Can you send me one of your mybitcoin.com receiving addresses?  I

promised to pay you back in bitcoins for your lunch, and I want to

cents a piece when we had lunch, they’re trading for over $1 each 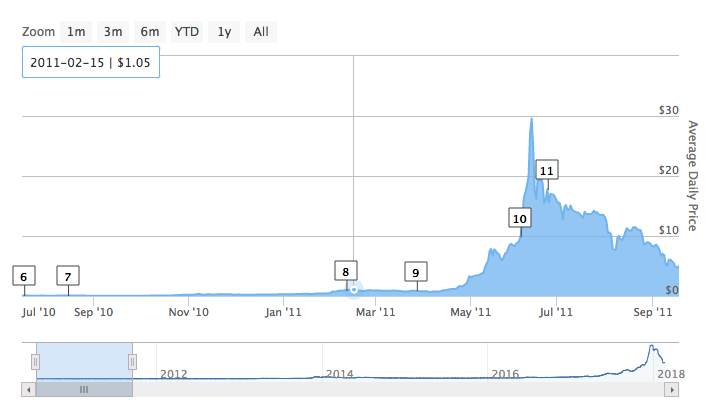 As you can see in their email conversation above, Mark’s wallet of choice at the time was MyBitcoin.com – a website that turned out to be a scam. On July 29, 2011 the company shut the website down when they realized their system had been breached. Allegedly, the website was hacked by Canadian hackers who were able to make off with 51% of their collective wealth.

On August 4, 2011 the website re-opened to post an incident report giving users a rundown on the security breach. A few days later, MyBitcoin issued a statement saying that 51% of all funds had been stolen, that MyBitcoin was going into receivership, and that they would begin their process of returning 49% of users wealth back to each user.

Roger on the Radio

The same day that Mark had lunch with Gavin, Mark went home, did a bit of research, and talked about Bitcoin that night on the radio. It just so happened that Roger Ver, the former CEO of MemoryDealers.com, was in the audience. Roger heard Mark discussing Bitcoin, and started to become interested in the new currency. On April 29, 2011, Roger reached out to Free Talk Live regarding running Bitcoin commercials on the air.  Roger was looking to pay for the Bitcoin advertisements in Bitcoin and asked Free Talk Live if that would be an acceptable payment method. Although Free Talk Live had never accepted Cryptocurrency for advertisement space before, they were willing to give Roger’s proposal a go.

Subject: Re: outside the system activism

Subject: RE: outside the system activism

Mostly I want to advertise the idea of bitcoin.

A mostly anonymous P2P digital currency that has tripled in value over the last few months.

A Little Station Made a Big Difference

As small as it may seem, the fact that Roger Ver stumbled upon Bitcoin by listening to a Free Talk Live show has great importance to the state of the industry today. Roger Ver is a big name in Bitcoin and was one of the earliest individuals to see that Bitcoin was going to be a world changing software. Ver used this knowledge to spread the word and invest in Bitcoin-related companies as early as 2011.

Roger invested $1 million into Blockchain related startups like Ripple, Blockchain.info, Bitpay, and Kraken when these projects were in their early stages, and created platforms like Bitcoinstore.com, which allows users to purchase consumer products with Bitcoin. Being an early pioneer in the world of cryptocurrencies earned Roger the title ‘Bitcoin Jesus’. In 2012 he was one of the five founders of the Bitcoin Foundation, an organization that was created for standardizing, protecting and promoting the use of Bitcoin and other cryptocurrencies.

If Roger had never heard about Bitcoin through Free Talk Live, it is possible that some of the major developments and industry leaders that received investments from Roger may have never come into fruition. If it wasn’t for Mark and Free Talk Live, Roger could have never learned of Bitcoin and would not have been an early investor in companies like Bitcoin exchange BitInstant. Mark thinks of Bitcoin as a fiat currency because it is not backed by gold. One of the main reasons Mark supports Bitcoin is because the government is not able to produce more Bitcoin to fund new wars. Before Bitcoin, Mark paid close attention to alternative currencies like the Liberty dollar.

Mark is currently a pig farmer in New Hampshire – a place where Mark says activists transact with cryptocurrency daily.

“It used to be if I hired someone to do work on my farm and I offered silver dimes, they would turn me down. Now I offer crypto and people are happy to take it.”

As digital currencies became more popular, Mark has found that more people have been calling in to talk about their thoughts and ask questions about cryptocurrency.

“It isn’t a show about crypto, but lots of people want to talk about it.”

This article was originally published on: CoinTelegraph on February 14, 2018 5:33 pm