Bitcoin dropped below $8000 today, Feb. 2, for the first time since November, 2017 as continuing pressure causes fresh sell-offs across cryptocurrency markets. 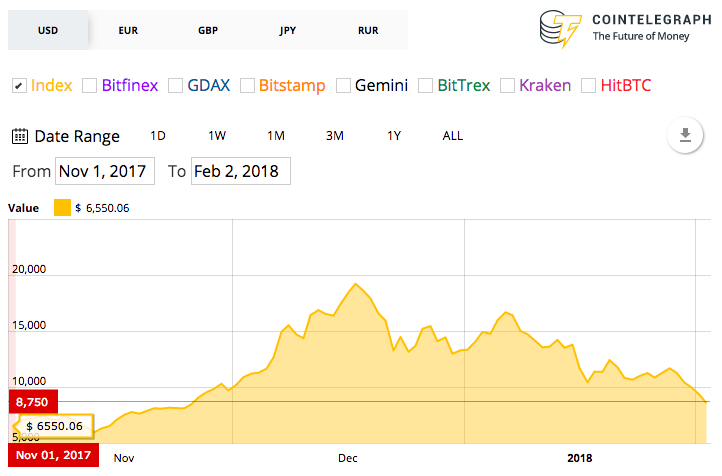 According to Cointelegraph’s price index, BTC hit a multi-month low of $7,791.02 at press time. Support appears to be in place to keep prices above the $7500 barrier, although commentators are nonetheless calling lows closer to $7000 before a reversal could take place.

Bitcoin’s losses also spurred knock-on effects for altcoins across the top one hundred tracked by CoinMarketCap, the vast majority losing at least 50 percent more in the past 24 hours than Bitcoin itself.

In total, cryptocurrency markets have shed over $100 billion from their combined market cap since yesterday, Feb. 1.

While markets appeared uninterested in South Korea’s exchange market KYC legislation going into effect this week, it was the Indian finance minister’s crypto regulation-related comments in a budget speech Feb. 1 that accelerated losses.

Despite local exchanges saying finance minister Arun Jaitley’s words did not include any new information on how lawmakers approach the industry, mainstream media and journalists alike announced a “ban” on Bitcoin in India after the speech.

This had a palpable effect on trading, despite industry reiterations that no outright ban was planned.

This article was originally published on: CoinTelegraph on February 2, 2018 1:27 pm